Our work on cell cycle regulation in Drosophila identified the Polo and Aurora kinases as major mitotic regulatory proteins. Subsequent studies from our lab and from Erich Nigg's showed that the related Polo-like kinase 4 (Plk4) drives canonical centriole duplication and de novo formation in human and Drosophila cells. We, and others, have shown that Plk4 levels are regulated through autophosphorylation that enables binding of the kinase to the F-box protein of SCF to mediate its destruction. We identified its other main partner to be Asterless (Asl); Asl targets Plk4 to centrioles in Drosophila, in human cells it shares that task with human Spd2 (Cep192).

We found that Drosophila Plk4 phosphorylates Ana2, the fly counterpart of human SAS5, to enable it to recruit Sas6, the key component of the 9-fold symmetrical centriole cartwheel. This triggers procentriole formation after centriole disengagement in telophase, a mechanism that is conserved in human cells.

The Centriole and the Golgi

We recently described an unexpected interaction between Sas6 and a trans-Golgi associated protein, Gorab, that is essential to establish 9-fold symmetry of the centriole and which is necessary for both centriole duplication and basal body formation in Drosophila.

The human counterpart of Gorab, which is also associated with the trans-Golgi, is mutated in the wrinkly skin disease, gerodermia osteodysplastica. By copying a missense mutation from gerodermia patients we created mutant Drosophila Gorab unable to localise to trans-Golgi but still able to rescue centriole and cilia defects of gorab null flies. We also found that expression of C-terminally tagged Gorab disrupts Golgi functions in cytokinesis of male meiosis, a dominant phenotype that can be overcome by a second mutation preventing Golgi targeting. Thus, centriole and Golgi functions of Gorab are separable.

We have recently used hydrogen-deuterium exchange mass spectrometry to map the interaction sites between Sas6 and Gorab and electron microscopy to visualize how the molecules interact.

Once the 9-fold symmetrical structure is established, the daughter centriole grows to its full length, predominantly in G2 phase. Once achieved the daughter is converted during mitosis into a structure able to nucleate cytoplasmic microtubules, the centrosome. We showed that centriole-to-centrosome conversion requires that the inner-zone centriole protein Cep135 is recruited together with Ana1 to the daughter centriole in the final stages of its biogenesis immediately before mitotic entry and this is followed shortly after by Asl/Cep152 recruitment. More recently we showed that in addition to Cep135, the Rcd4/PPP1R35 molecule is also required for Ana1 recruitment in somatic centrioles but curiously not spermatocyte giant centrioles. We now wish to determine the functional inter-relationships of these proteins in centriole to centrosome conversion and also centriole elongation.

Ciliary Function in the Developing Peripheral Nervous System and Testes 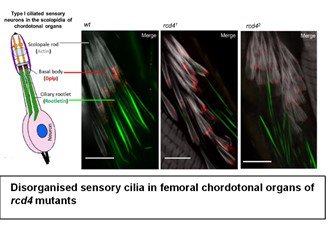 To address the puzzle of the partially overlapping function of centriole proteins throughout development, we study two Drosophila tissues in which dividing cells use centrioles to organise centrosomes at their spindle poles and differentiating cells develop basal bodies that template axonemal structures. These are the leg imaginal disc, in which ciliated neurosensory cells are formed, and the testis, which produces flagellated sperm. In the neurosensory organs, cilia with doublet microtubules are generated from basal bodies having similar morphology to the centrioles of their precursor cells. In the male germ line, the centriole undergoes a dramatic transition between the gonial mitoses and the primary spermatocyte in which its triplet microtubules elongate by almost 30-fold. This growth phase imposes a different set of requirements upon molecules used in phases 2 and 3 of conventional duplication. Moreover, the resulting pair of primary cilia differ from other cilia in being able to re-acquire the characteristics of centrosomes on meiotic entry. Finally, at the completion of meiosis, the giant centrioles template formation of sperm axonemes, whose morphology differ dramatically from the primary cilia of spermatocytes. Our aim is to determine how the same set of molecules are used to generate these differing centrioles/basal bodies in these two different tissues.

Supernumerary Centrosomes in the Mouse

To address the long-standing question of what might multiple centrosomes be doing in tumour cells, we have made a mouse in which we can induce Plk4 expression and hence centrosome overduplication. We found that Plk4 over-expression leads to hyper-proliferation of the skin exacerbated by loss of p53; it also advances tumour formation in p53-/- mice.

Mice overexpressing Plk4 developed grey hair due to a loss of differentiated melanocytes and bald patches of skin associated with a thickening of the epidermis. We found that the balance of cell proliferation to differentiation was disturbed in the skin of these mice apparently because the over-duplication of centrosomes does not permit primary cilia to form. Because the primary cilia are necessary for signaling between cells, this perturbs cell differentiation

Plk4's Function in the Acentriolar Mouse Oocyte and Early Embryo 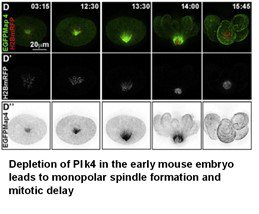 Although Plk4's main function is in centriole duplicaiotn, clues to its additional functions are emerging from our studies of its functions in mouse oocytes and early embryos, where centrioles have yet to be assembled and the spindle is organized by acentriolar microtubule organizing centers.

We have found that bipolar spindle in the early embryo requires Plk4 in concert with its partner Cep152. However, in the occyte, the MTOCs not only require Plk4 but also Aurora A to become fully active. A more comprehensive understanding of spindle formation at the stages will give insights into many aspects of human fertility.